A History of Nail Lacquer: Blood Red Nails On Your Fingertips 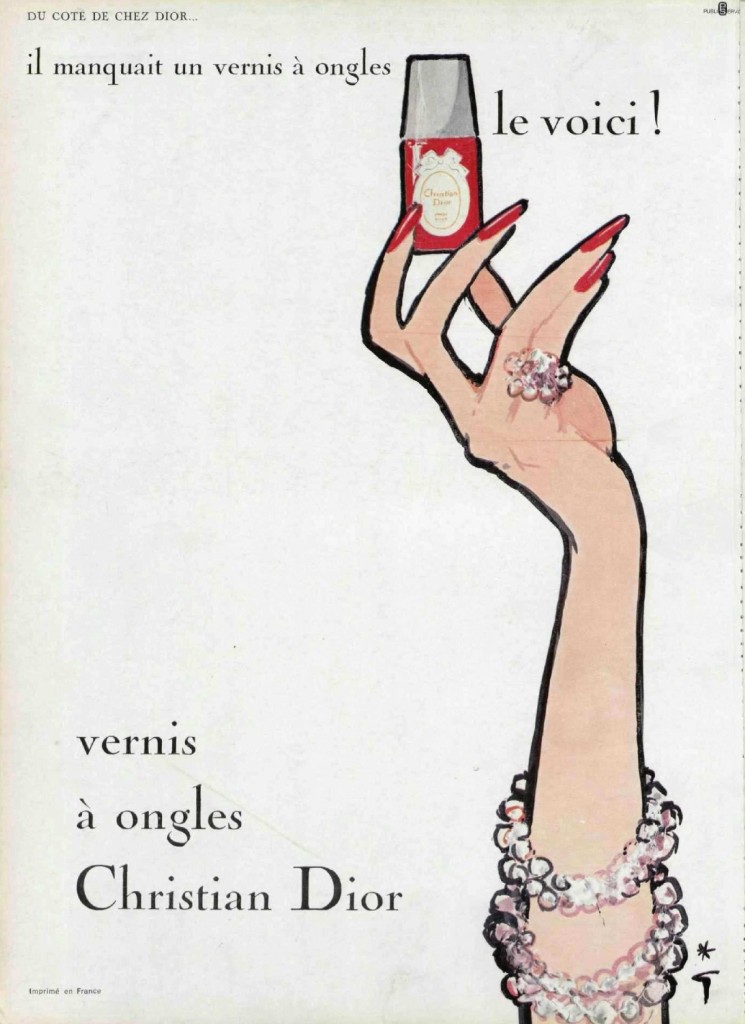 Christian Dior Ad by René Gruau, circa 1962  (Image via flickr)

Have I ever told you that I am completely fascinated by history?  I’m not talking about the Civil War and Ancient Greece and the Tudor Dynasty and dinosaurs and such (although I do find those fascinating as well).

Have you ever stopped to think about how it all began? Who was it that sat down one day, looked at their nails, completely transfixed, and said to themselves “dude, I should paint these bitches!” Okay. Maybe that isn’t exactly what they said. Maybe it was more Yoda-like. “Nails I have. Paint them I must.”

Whatever. You get the gist.

So.  Who exactly was it? I wish I could tell you.

The Birth of a Trend

The concept of the manicure began in India well over 5,000 years ago with the use of henna as a nail paint.  This practice spread and was adopted by different cultures.  It is believed that the people of southern Babylonia took it a step-further around 4,000 BC and turned to solid gold to achieve the perfect manicure. Very chic.

Now, let’s flash-forward to 3,000 BC China.   The Chinese viewed nail color as a way to indicate wealth and social status.  They did not use henna or gold, but instead created a base mixture of egg whites, gelatin, beeswax and gum Arabic.   The desired shades were created by adding rose, orchid and impatiens petals.  It wasn’t an easy process and the nails had to be soaked in this mixture for a few hours for the color to set.   According to a 15th century Ming manuscript the colors used most often were varying shades of red and black.

As the years passed, the Chinese began painting their nails the colors of the ruling dynasty. During the Chou Dynasty (circa 600 BC), gold and silver dust was used to create the colors worn by nobility.   The nail was also reportedly inlaid with precious stones and complex cloisonné designs.   It seems that nail color was strictly reserved for royalty in those days. Some sources suggest that if a member of the lower class was caught wearing nail polish they would be sentenced to the death penalty.  Harsh.

Thank You, Nefertiti and Cleopatra

Nefertiti and Cleopatra are remembered, among other things, as two of the most beautiful women of their time.   It is no surprise, then, that they were the first to make something as iconic as red nail polish famous!  During their respective reigns, societal hierarchy was indicated by the specific color worn.  The stronger the shade of red, the more power the person possessed.

Although the practice likely existed earlier, sources suggest that Nefertiti, Queen of  Egypt (14th century BC) colored her fingernails a ruby-red color.  Nefertiti and her royal court would use henna (and sometimes even blood!) to color their nails.  Vampy. 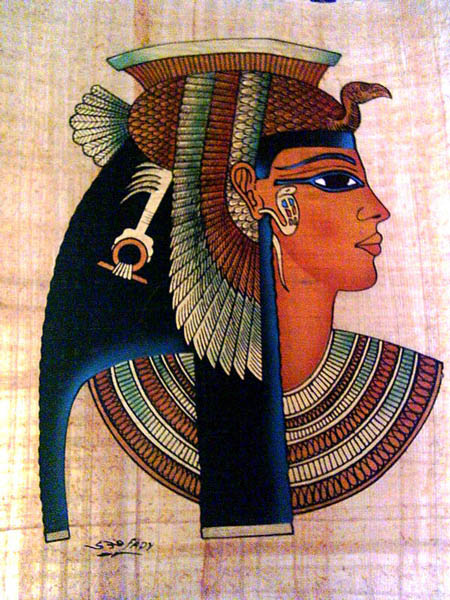 Cleopatra, the last pharaoh of Ancient Egypt, continued this trend into the first century BC.  Unlike Nefertiti, it is believed she favored a striking crimson shade.  During her reign women of lower rank were permitted only pale colors as red was reserved for royalty alone.

This fascination with red polish remained constant throughout history and still continues today.

The next few centuries don’t cast much light on nail polish trends.  You might say that this was a period of growing pains for the art of the manicure. Nevertheless, there are a few notable highlights: 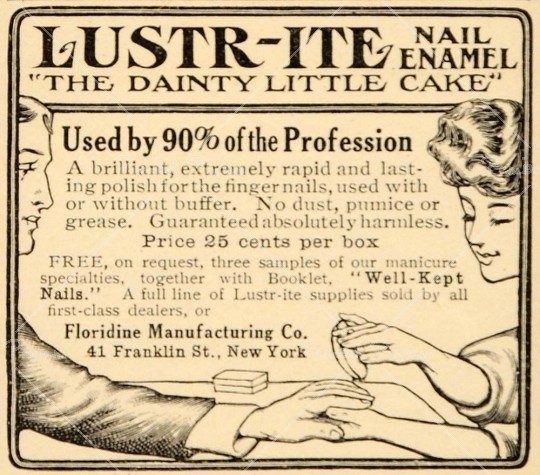 Car Paint to the Rescue!

The catalyst for the colored nail lacquer we all know and love was the 1920 creation of high-gloss automobile paints.

A French makeup-artist by the name of Michelle Manard had the ingenious idea of adapting these paints for use on nails.  She played around with the formula and developed a glossy lacquer similar to the nail polish we use today.  Her employer, The Charles Revson Company, recognized a goldmine when they saw one and began work to perfect the formula.  Owners Charles and Joseph Revson partnered with a man named Charles Lachman and, using Manard’s original idea, created an opaque, non-streaking nail polish based on pigments instead of dyes.

In 1932, the company changed its name to Revlon and began selling the very first modern nail polish! 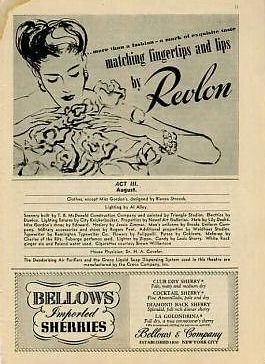 The first modern manicure was known as the “moon manicure”.  To achieve this look the cuticles were cut, free edges filed into points, and polish was applied to the nail but not to the moon and tip (see ad below). 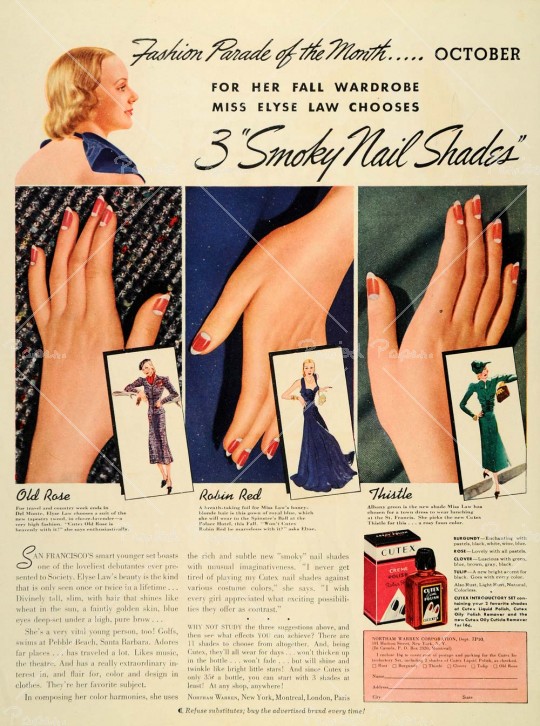 Now, this might come as a bit of a shock to you, but the next big thing to influence nail polish was an innovation that had little to do with beauty products!

The introduction of Technicolor in 1922 affected more than just the film industry.  Shades of gray became a thing of the past and moviegoers were able to see everything in color.  The actors and actresses.  The sets.  The clothing.  The make-up.  As they “oohed and aahed” over this amazing change in cinema, women were suddenly treated to a spectacular sight – Rita Hayworth’s red lips and nails! 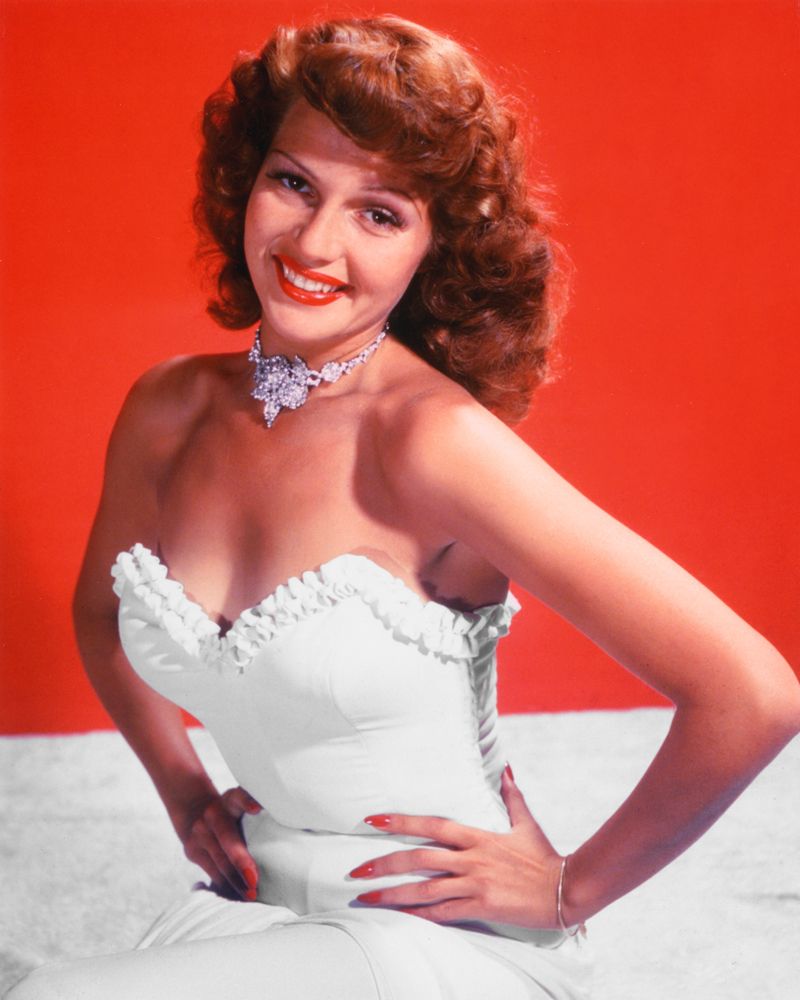 Every woman wanted them.  Revlon, always ahead of the game, realized this and created an extensive line of polishes to meet consumer needs.

Ever since, the trends of the times have continued to mirror the styles seen in films and television:

Today nail polish has become a superstar by its own right.  There are too many colors, finishes, textures, formulas and methods to count.  Instead of going into all of this, I’ll just leave you with one link.  My nail polish bible: All Lacquered Up.  Michelle is a nail polish guru and is always up to date on the latest releases and trends.  You MUST check her out.

In the meantime, you tell me:

Are you a nail-polish fanatic?

What have been some of your crazy nail-color stories?

How many reds do YOU own?