FTF Blog Event – What Makes Me, Me.

by Beautifully Invisible on April 6, 2011

Those of you that have been following this blog for some time know that I am a big supporter of Sunglass Hut’s Full Time (undeniably) Fabulous blogger, Kristy Eléna.  I first “met” Kristy in August 2010 when we connected over a controversial Vogue Italia spread.  Since then, I have grown into one of Kristy’s biggest fans.

One of the things that has always drawn me to Kristy is her passion.  She puts her heart and soul into everything that she does and doesn’t attempt to hide it.  This passion is what makes her such a successful blogger and, in my opinion, earned her the Full Time Fabulous blogger crown.

Her passion for fashion and blogging go beyond daily posts and encompass the whole blogging community.  She is determined to strengthen and grow the fashion blogosphere, and her latest endeavor – a series of monthly Full Time Fabulous (FTF) Blog Events  – is designed to do just that.

This month’s theme was submitted by Sweet of Pens and Lens and is a testament to the worldwide appeal of fashion blogging.  Participants from all over the world are using this inaugural FTF Blog Event as a platform to introduce themselves by creating a visual presentation of how their heritage or location in the world has influenced them.

Personally, I have decided to focus on both aspects.  I have lived in Cleveland, Ohio my whole life.  The city, and my experiences here, have certainly played a role in making me the person I am today.  But my experiences aren’t limited to the city confines.  They go far beyond those borders, across the Atlantic and back again.

But first, let’s start with Cleveland…

While preparing this post today I posed a quick question on twitter:  When you hear the word “Cleveland” what is the FIRST thing that comes to mind?

Some of the answers I received were a bit unexpected:

Why unexpected, you ask?  Because the responses I received were all positive.  I was expecting responses like Burning River.

Those are some of the responses I received when I asked that question of some Clevelanders.  I guess what they say is true – we are our own worst critics!

No one can deny that the City of Cleveland has become infamous for the moments illustrated above.  Fortunately, Cleveland’s very rich history goes far beyond that.  Did you know that the Eliot Ness was once the City Safety Director?  Or that John D. Rockefeller called Cleveland home?  Did you know that Cleveland, not Krypton, is the true birthplace of Superman?  That the electronic streetlight and streetcar were invented here?  What about LifeSavers candy?  The whole body x-ray machine?  The term “rock-n-roll“?  Did you know that Halle Berry,  Drew Carry, Dorothy Dandridge, Paul Newman, President James Garfield, and Poet Langston Hughes all called Cleveland “home”?

Frankly, I would be surprised if you did know all that.

My twitter buddies illustrated some of the other things that Cleveland is known for:

So, what else is Cleveland known for?

Here are a few tidbits that may be a bit less familiar to you:

What is my Cleveland?

“My” Cleveland is a bit different from what most locals see everyday.  I work in Cleveland’s University Circle, so I spend most of my time on Wade Oval.  The Cleveland Museum of Art.  The Cleveland Botanical Garden.  The Museum of Natural History. The Fine Arts Garden.  Severance Hall.  Those are my haunts.  My world is the one in the image above.  And the photographer and fashionista in me LOVES it.

Why look for inspiration anywhere else when you can find it in nature everyday?  Nothing can match the vibrant colors and varied textures of nature’s own hand.

So, who is Beautifully Invisible?

We are all a product of our experiences.  The people who touch our lives every day, the places we go, the things we see and the memories we make constantly inform our lives.  They help us grow and make us who we are today.

Having been born and raised in Cleveland, the city certainly is a part of who I am today.  But it is only one part.  So what else is there?

And that, my friends, in a nutshell is me.  My inspirations.  My philosophy on life.  And just… me.

Now, what makes you, you?  How have your locale and/or heritage helped define you?

Thank you to Kristy Eléna and Sunglass Hut for hosting this FTF Blog Event!  If you would like to read Kristy’s own response and check out the other entries, please click here.

NOTE: All images were taken by me or courtesy of Google Images unless otherwise indicated.

Next post: 10 Things about your Blog that Drive Me Crazy 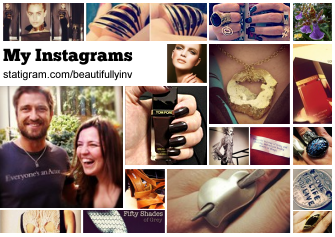